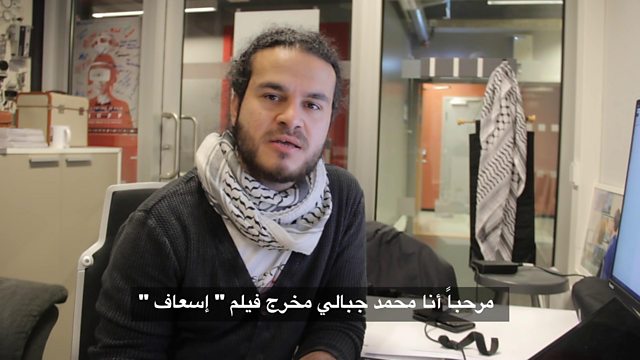 'Ambulance' is a first-person account of the most recent war in Gaza. Mohamed Jabaly, a young journalist from Gaza City on assignment to shoot medical procedures, joins an ambulance crew to film. On his first day, war breaks out. We experience the war through Mohamed’s eyes as he comes of age among broken bodies, terrified families, and the constant risk of sudden death. In response to the dark chaos of war, Mohamed learns to rely on his captain and crew-mates, who in turn support Mohamed to make a film that expresses both the trauma and hope of the too-often invisible citizens of Gaza. With them, we witness the crushing loss and destruction. Ambulance is a gripping example of frontline, participatory documentary filmmaking, exposing the fear and violence that overtook the Strip in July 2014. Winner of the 2017 BBC Arabic 'Young Journalist Award'.