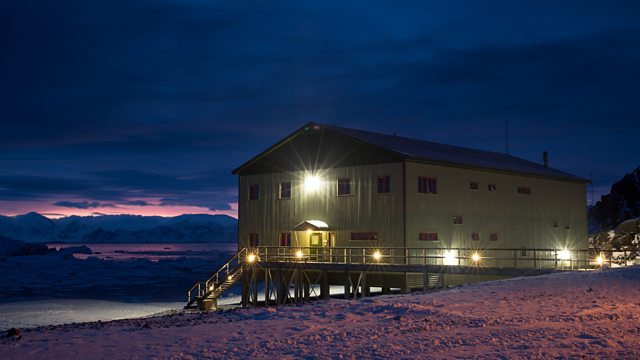 Cerys Matthews presents music requests and special messages.for the staff at the British Antarctic Survey in the South Atlantic, where the penguins outnumber the listeners.

Cerys Matthews presents one of the BBC World Service’s most unusual programmes. The Antarctic Midwinter Broadcast is for the 38 scientists and support staff overwintering at three UK research stations in Antarctica. It is transmitted Midwinter’s Day, 21 June, their darkest day of the year.

The penguins will definitely outnumber the audience but listening to the programme is a much anticipated annual tradition for the ‘overwinterers’. Most of the staff - 25 of the 38 - are at the UK’s largest Antarctic research station, Rothera. But 2000 km further north, the rest will listen in stations at Bird Island and King Edward Point.

In each of the stations, base commanders rise early to cook breakfast for their staff and presents are exchanged. There are sports and, weather permitting, even a naked streak in the snow. Penguin warning: avert your eyes.

After the feasting, staff will gather round a shortwave set to listen to the broadcast, which is packed with greetings from family and friends back home, music, a message from the British Antarctic Survey director, Jane Francis, and a sprinkling of celebrity guests wishing them well. Finally, there’s a screening of the Antarctic horror movie The Thing.

This year Cerys is joined by British Antarctic Survey marine biologist, Terri Souster, and mechanic and ‘ice trucker’ Jonny Yates - who found love in a cold climate and are now husband and wife.

The Antarctic Midwinter Broadcast is produced by Martin Redfern and is a Boffin Media production for BBC World Service.

Photo: One of the British Antarctic Survey buildings in the Antarctic Credit: BAS