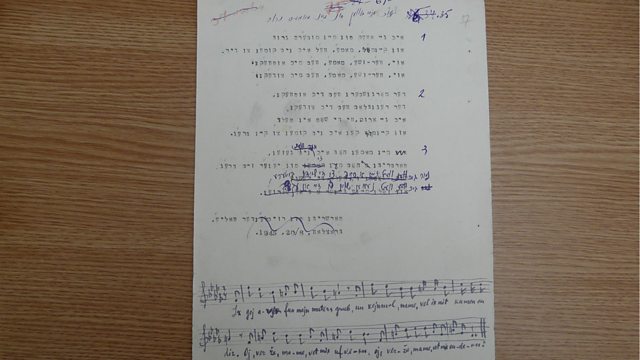 Yiddish songs from WW2 brought back to life

During the Second World War, a specialist unit or 'Cabinet' of Soviet researchers collected Yiddish songs which chronicled survival and death in Nazi-occupied Europe. The songs also told the stories of Jewish soldiers who fought for the Red Army. The scientists who recorded the songs were arrested and their work confiscated and hidden by the Stalin regime. In the late 1990s, the forgotten songs were discovered in the archives in Ukraine. The academic behind this discovery, Dr Anna Shternshis of the University of Toronto, has taken on the task of bringing the tunes back to life with the help of modern-day artists. She spoke to BBC Newsday.

A recording of the songs has been released on the Six Degrees Records label: 'Yiddish Glory: The Lost Songs of World War II'.

(Picture: Piece of paper on which a researcher wrote down the words of the song "I go away from my mother's grave". Credit: Vernadsky National Library of Ukraine, Manuscript Department)