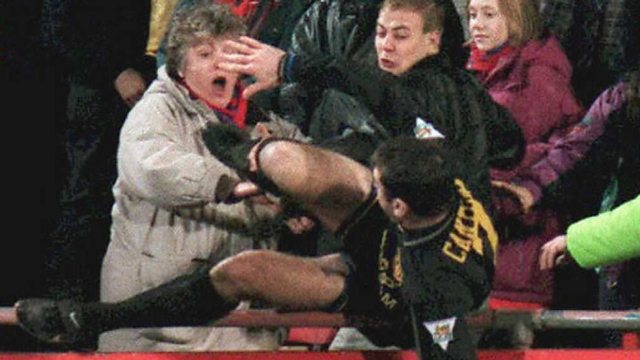 First broadcast in 2015, we look back at Eric Cantona's infamous 'kung-fu' kick during a Manchester United game at Crystal Palace on 25 January 1995.

First broadcast in 2015, we look back at Eric Cantona's infamous 'kung-fu' kick against Crystal Palace fan during a Manchester United on 25 January 1995 - an event that shocked the world of football.

Palace fan Matthew Simmons ran down 11 rows to abuse Cantona as he walked back to the dressing rooms. What followed caused a sensation across the sporting world.

Cantona was sentenced to two weeks in prison which was reduced on 31 March to 120 hours community service for the attack.

This programme was first broadcast on the twentieth anniversary of the incident in January 2015.