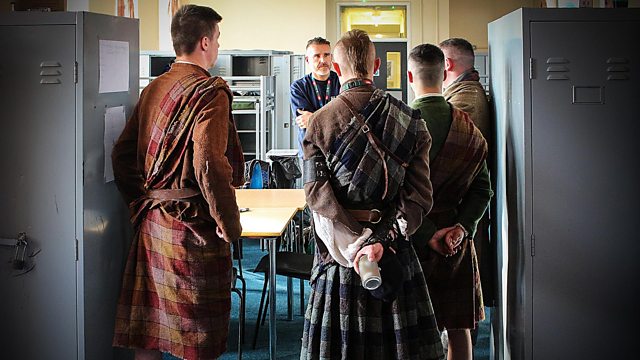 The Glasgow Boys: Chaos and Calm

Byron Vincent joins the Violence Reduction Unit in Glasgow to see how they turn young men away from lives of violence and chaos.

Byron Vincent joins the Violence Reduction Unit in Glasgow to see how they turn young men away from lives of violence and chaos.

Three years ago, after he discussed his own violent and chaotic youth in a Four Thought talk on Radio 4, Byron was invited to come and speak at the VRU. Since then he has been back several times - now he experiences the unit's work directly. Byron spent two weeks embedded in two of the VRU's programmes, from watching the scheme's participants working in food trucks in the west end of Glasgow to joining the cast at the Royal Military Tattoo in Edinburgh.

After hours, and with his powerful personal connection to their lives, Byron has extraordinarily candid conversations with the young men involved in the scheme about fear, insecurity, redemption, love, hope and the real reasons for spiralling violence. But what sacrifices will be required for them to make new lives, free from chaos and violence?