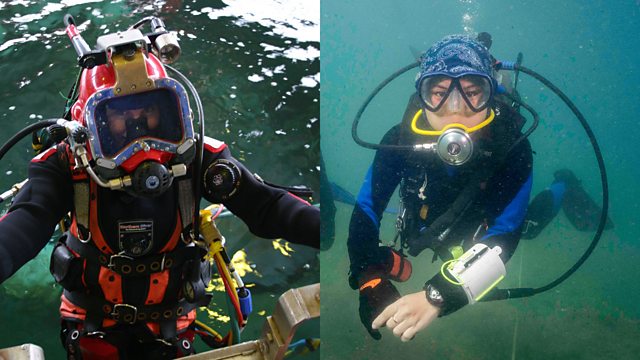 Diving into the Past

Two marine archaeologists from Thailand and Australia talk to Kim Chakanetsa about their love of history, the thrill of discovery, and the dangerous reality of diving.

Two archaeologists take us on an underwater adventure to uncover secrets about our past. Between them they've explored wooden vessels dating back hundreds of years, discovered Roman statues in the Mediterranean and Chinese ceramics in the Gulf of Thailand, and even stumbled upon what may be an Aboriginal rubbish dump.

Pornnatcha 'Jo' Sankhaprasit is Thailand's first ever female underwater archaeologist. She grew up in the Thai mountains and didn't even see the sea until she was nine years old. She's always had a passion for history and adventure, and she was drawn to marine archaeology because sites are often far better preserved underwater than on land. However the water, and deep dives in particular, still scare her - and the breathing apparatus weighs more than she does! But it's all worth it when she gets to work on ancient wrecks like the well-preserved Chinese ship that sank in the Gulf of Thailand more than 500 years ago.

Sarah Ward is a renowned maritime archaeologist from Australia, who has a vast and varied experience in her field. She has worked on underwater archaeological sites from a Roman wreck off the coast of Turkey, to the Tudor flagship, the Mary Rose, and a warship that sank off the coast of Argentina in 1790. These days she works mainly on commercial maritime projects, carrying out detailed surveys and excavations of harbours, ports and other coastal sites.

See all clips from Diving into the Past (2)