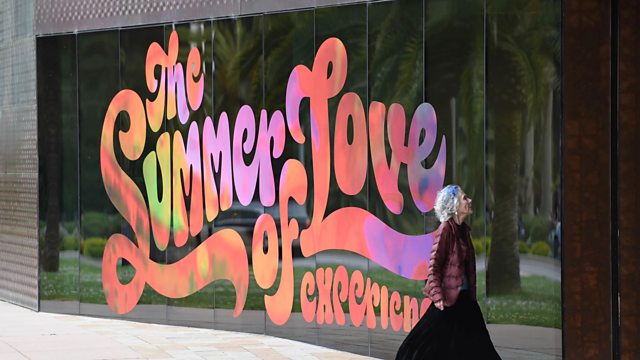 If You're Going to San Francisco

In the summer of 1967, thousands of hippies descended on San Francisco. Marco Werman looks back at the Summer of Love.

Fifty years ago, during a few short weeks in the summer of 1967, thousands of hippies descended on San Francisco. The small suburb of Haight-Ashbury became a centre for sexual freedom, freedom to experiment with mind blowing drugs, to debate social and economic utopias and freedom to listen to loud rock music. Peace and Love were the mantras of the day, and the Flower Children embraced psychedelic kaftans, music and miniskirts and all things floral. LSD was the passport to this new Nirvana.

Marco Werman looks back at those hedonistic times through the music and recollections of people who were there 50 years ago, and hears why after 1967, for many of them, the world was never quite the same place again.

(Photo: A woman walks towards the entrance to The Summer of Love Experience: Art, Fashion, and Rock'n'Roll, art exhibition at the deYoung museum, San Francisco, California, 2017. Credit: Josh Edelson/AFP)

The End of Sand