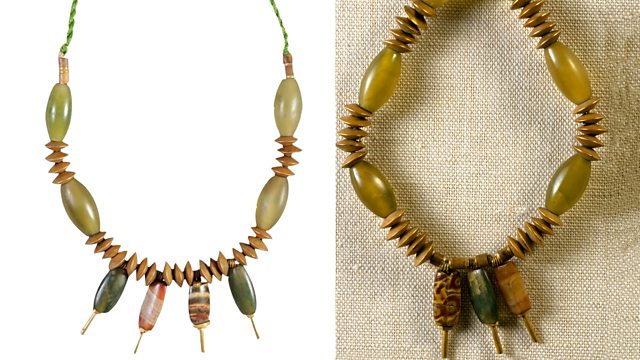 The Necklace That Divided Two Nations

Kanishk Tharoor explores ancient artefacts that were caught up in the events around India and Pakistan's independence in 1947.

Seventy years ago, India and Pakistan became independent nations - but at a cost. People and lands were partitioned, and a once shared heritage was broken apart. Kanishk Tharoor explores the tussle for ancient history and the prized artefacts of the Indus Valley civilization. There was a bureaucratic saga over the fates of the priest-king, the dancing girl, and the jade necklace so precious to both India and Pakistan that neither country could let the other have it whole.

With thanks to Anwesha Sengupta, Institute of Development Studies Kolkata

Image: The Mohenjo Daro jade necklace that was cut in two. India's share on the left, Pakistan's share on the right. Credit: Archaeological Survey of India and Getty Images

See all recipes from The Necklace That Divided Two Nations