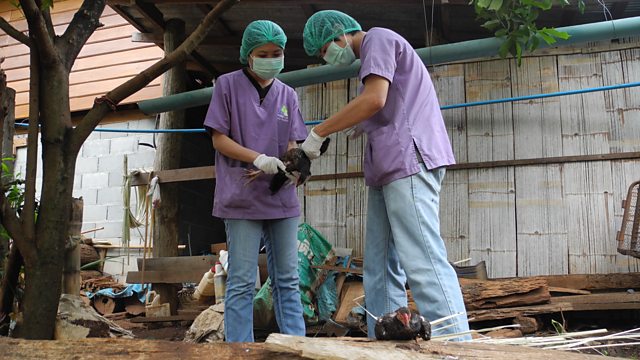 We meet an army of volunteers on the front line in the fight against dangerous diseases. They help scientists spot outbreaks before they spread, by taking photos of dead animals.

World Hacks goes to Thailand to meet an army of volunteers on the front line in the fight against dangerous diseases, like Ebola and bird flu.

Nearly 100 years ago Spanish Flu infected a third of the world’s population and killed about 50 million people. With increased international travel, growing populations and environmental damage, experts warn that viruses now have the potential to spread faster, and we could be on course for another pandemic, with devastating consequences.
Pandemics often originate in places where animals and people live in close contact, making it easy for animal diseases to spill over into humans, and where health systems may not be able to pick up on threats and respond quickly. In rural Thailand, 75% of people keep animals in their back gardens, making it hard to keep track of new outbreaks. In 2004, a strain of bird flu swept through the country, as well as Vietnam, Cambodia and Indonesia, infecting more than 125 people and killing about half of them.
Vets at Chiang Mai University have started a project called PODD – the full name in Thai means “Look closely and you will see”. They’ve trained up 3,000 volunteers to take photos of dead animals and report any signs of sickness in their communities, helping spot dangerous outbreaks and contain them before they spread.

Can We Supercharge School?