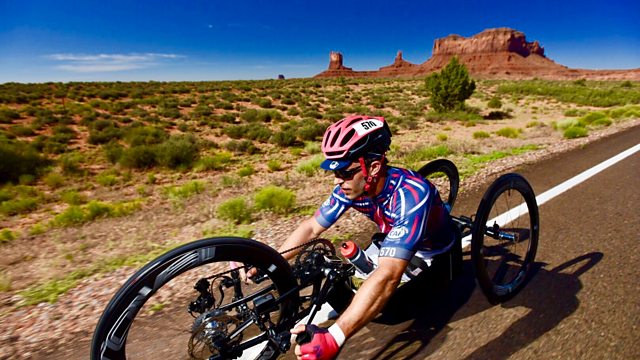 The Fastest Hands in the West

Andre Kajlich tells us about becoming the first para athlete to complete the 4,800 kilometre ‘Race Across America’.

The Fastest Hands in the West
Andre Kajlich tells us about becoming the first para athlete to complete the 4,800 kilometre ‘Race Across America’. Andre competed on a handcycle, and finished the race in 12 days and 16 hours. One of only 14 to finish from the original 39 competitors.

Bony’s banging beats
The Premier League table isn’t the only the chart Manchester City striker Wilfred Bony will be interested in this season. The Ivory Coast international has been telling us about launching his own record label. The aim is to help Afrobeat artists get into the music industry.

Scoring into the roof of Africa’s net
Women from over 20 countries have played a full 90 minute football match at the top of Mount Kilimanjaro and with it setting a new world record for the highest match in history. The aim of was to encourage an equal playing field for women in sport. Laura Youngson played in the match and talks about the struggles of playing 5000 metres above sea level.

The Land of the Rising Rugby Fan
Japan will host the Rugby World Cup in 2019. It will be the first time the tournament will be held in Asia. So how are preparations going and has their famous victory over South Africa in the 2015 edition sparked an interest in the sport? Simon Parker reports from Japan.

The Power of Two

Is There Any Respect Left in Tennis?