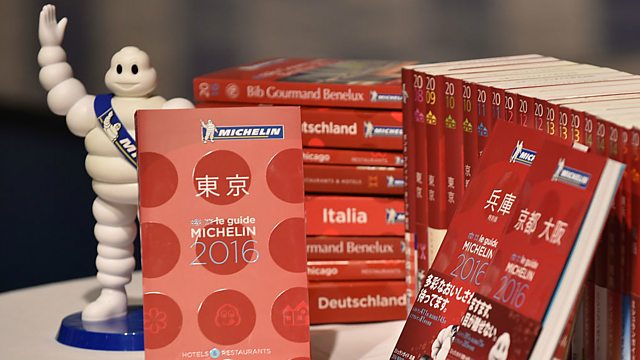 Much Ado About Michelin

The allure and mystique of the Michelin star

For many chefs winning a Michelin star, or two or three, is often considered the pinnacle of their career. It could put them on the path to money and fame. But some critics claim not all stars are equal- and in an industry where receiving one could mean the difference between profit and loss, the stakes are high.

In this episode we take a closer look at the Michelin guide and how two brothers made the name of their tyre business synonymous with the highest quality food in the world. Why do some chefs view earning a Michelin star as a curse, and others as a celebration?

We’ll get a behind the scenes look at the life of a Michelin inspector, with an interview with Claire Dorland-Clauzel, who heads the guides. The BBC's Kent DePinto speaks to Michelin-starred chef Tom Kemble on how the accolade has helped his career. Gary Pisano, professor of business administration at the Harvard Business School, talks about the impact of a Michelin star on a restaurant's ability to innovate. The BBC's Ashleigh Nghiem meets the Singaporian street hawker who was awarded a Michelin star. And we hear from food critic Andy Hayler on why he thinks recent partnerships by Michelin with tourist boards may be leading tourists astray.

What Time is Dinner?

See all clips from Much Ado About Michelin (2)