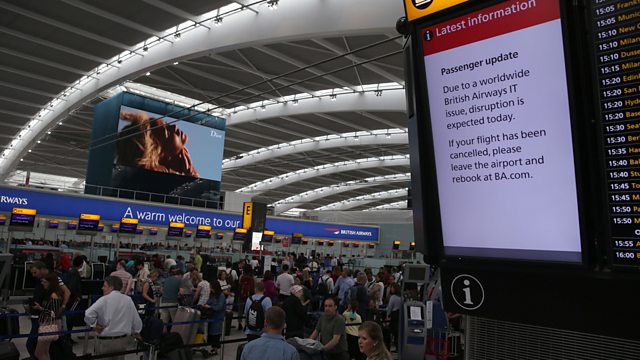 Lessons from the BA IT outage; Tim Wu describes the threat to Net Neutrality and the corrupted internet; Alexandra Grigore on cheap and easy finger print identification

The huge British Airways IT systems failure caused extraordinary disruption. What lies behind it and what might be done to ensure it does not happen again in the future? Click talks to the tech expert, Roland Moore-Colyer.

Tim Wu’s new book, The Attention Merchants, tells the story of the influence of advertisers and programmers on all of us. Wu explores the evolution of advertising from TV’s golden age to our present internet age where we surrender our data for free services that are accompanied with advertising. He talks to Click, reflecting on the growing unease about big tech companies harvesting our data, and how our ‘attention’ can be bought and sold.

Click talks to Alexandra Grigore, the CEO of Simprints which has developed an inexpensive biometric scanner, mobile app, and cloud platform that could become the first identity provider for over a billion people who do not have formal IDs. The technology uses people’s fingerprints to accurately link them to records.

(Photo caption: A displays warns passengers to 'Expect Disruption' inside Terminal 5 of London's Heathrow Airport on May 29, 2017 © Daniel Leal-Olivas/AFP/Getty Images)

DECODE: Whose Data is it Anyway?

Is the Internet a Safe Space for Extremism?