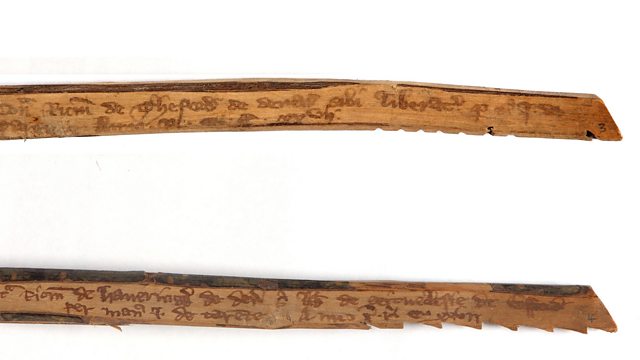 The tally stick was a kind of money, and a particularly instructive kind of money. It shows us what money really is: a kind of debt that can be traded freely.

Tally sticks were made from willow harvested along the banks of the Thames in London. The stick would contain a record of the debt. It might say, for example, “9£ 4s 4p from Fulk Basset for the farm of Wycombe”. Fulk Basset, by the way, might sound like a character from Star Wars but was in fact a Bishop of London in the 13th century. He owed his debt to King Henry III. Now comes the elegant part. The stick would be split in half, down its length from one end to the other. The debtor would retain half, called the “foil”. The creditor would retain the other half, called the “stock”. (Even today British bankers use the word “stocks” to refer to debts of the British government.) Because willow has a natural and distinctive grain, the two halves would match only each other. As Tim Harford explains, the tally stick system enabled something radical to occur. If you had a tally stock showing that Bishop Basset owed you five pounds, then unless you worried that Bishop Basset wasn’t good for the money, the tally stock itself was worth close to five pounds in its own right - like money; a kind of debt, which can be traded freely.