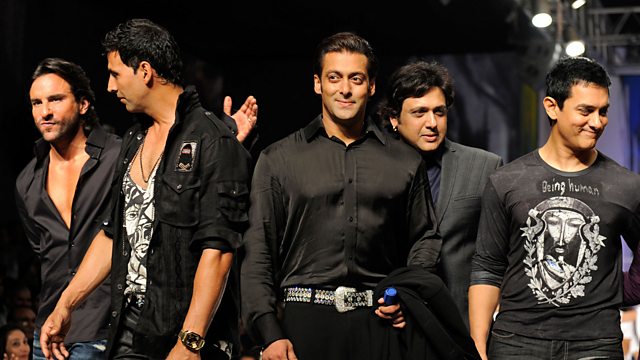 Yasmin Alibhai-Brown finds out how a number of male actors with the same Muslim surname have taken over Bollywood.

Bollywood, the world's biggest film industry had, until recently, largely avoided the inter-faith tensions that surface repeatedly elsewhere in India. Many leading men are Muslims - a fact that has been no apparent impediment to their success. Yasmin Alibhai-Brown explores the history of Muslims in Bollywood through the prism of the number of powerful leading male actors who share the same Muslim surname - Khan.

The Khans have quite literally taken over Bollywood. Aamir, Salman, Shah Rukh, Aamer, Saif Ali and Irfan - to name but a few - currently dominate the industry. Almost all are Muslim or of Muslim descent, hugely successful and able to navigate two of the most powerful forces working against them - the puritanism of Islam and the ever-increasing grip of Hindu fundamentalism in India.

They are some of the nation's best-loved and most successful actors, brand ambassadors of the official "Incredible India" tourism campaign - and Muslims in a majority-Hindu nation. And many of them are married to Hindus.

Prominent actors, writers, directors, producers, composers, film historians, politicians and critics explain how the Khans have managed to successfully carve out their careers as Muslims in a Hindu world, about how they see the future unfolding under the growing Hindu fundamentalist culture of India, as well as against the national and international backdrop of Islamic fundamentalism.

Inside the Israeli Hospital