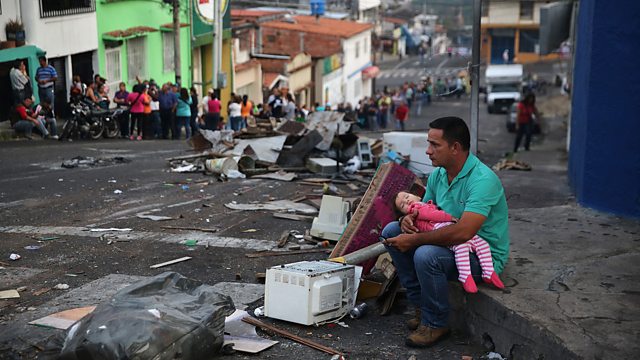 How Did Venezuela Go From So Rich To So Poor?

Once the richest country in South America, Venezuela is now in deep economic crisis.

Once the richest country in South America, Venezuela is now in deep economic crisis.

Children in school are fainting from hunger; patients are dying from the lack of basic medicine. As prices spiral out of control, cash is carried not in wallets, but in backpacks. Street protests over the crisis are growing in size and frequency - and the government's response becoming ever more authoritarian.

Yet in 1970, Venezuela was among the wealthiest countries in the world. It was held up as a beacon of democracy and stability - an example of a successful developing economy that turned oil resource wealth into riches. So what went wrong? How did Venezuela go from so rich to so poor?

(Photo: A father and daughter rest while someone holds their place before sunrise in a long line to buy basic foodstuffs at a supermarket in San Cristobal, Venezuela. Credit: Getty Images)

How did North Korea get the bomb?

How Did Immigration Stop Being a Political Taboo in the UK?

See all clips from How Did Venezuela Go From So Rich To So Poor? (2)