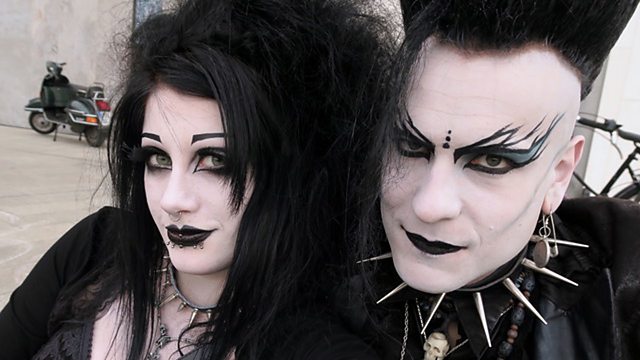 Why would anyone be a goth? What is the appeal of this dark and spooky subculture that embraces death, pain and sadness?

Why would anyone be a goth? What is the appeal of this dark and spooky subculture that embraces death, pain and sadness? Goths have been attacked, abused and are often misunderstood, but still choose to stand out – dramatically - from the crowd.

Catherine Carr talks to goths about their music, their dress and their love of the darker side of life. Why has this scene that began in the UK in the late 1970s and has spread worldwide, adapted and endured?

She hears from gothic vlogger, Black Friday, about how others react to her striking style and that of her goth husband, Matthius; she learns from Dr Catherine Spooner of Lancaster University about the role and influence of gothic literature in the goth scene and finds out from Professor Isabella Van Elferen of Kingston University, London about the transcendental power of goth music. Catherine talks to gothic blogger, La Carmina, about the extraordinary and extreme goth scene in Japan that includes body modifications; Dr Paul Hodkinson of Surrey University explains the enduring appeal of the subculture and why once a goth, you’re always a goth. And she meets Sylvia Lancaster, whose daughter Sophie, a goth, was murdered because of the way she looked.

Are you a numbers person?

See all clips from Goths (2)