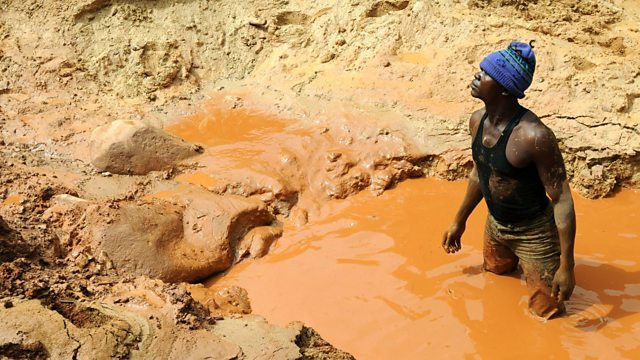 Mining in Congo: Knee-Deep in Corruption?

Are gold and other minerals still hotbeds of banditry, theft and bribery in the DR Congo? We hear from a Congolese gold miner and from an activist declared persona non grata.

Are gold and other minerals still hotbeds of banditry, theft and bribery in the DR Congo? And is it getting worse as the country's postponed presidential election looms?

Presenter Ed Butler hears the allegations of Congolese gold mine owner and presidential candidate Emmanuel Weyi. He also speaks to Sophia Pickles of the NGO Global Witness, who says she has been threatened with arrest because of her work uncovering a guns-for-gold deal in the country.

Plus, the BBC's Laurence Knight reports on weaknesses in the systems supposed to control the sourcing of another mineral in Congo - the obscure metal tantalum.

(Picture: Man stands in a pool of water in a gold mine in north eastern Congo; Credit: Lionel Healing/AFP/Getty Images)

Brexit: A Warning to London