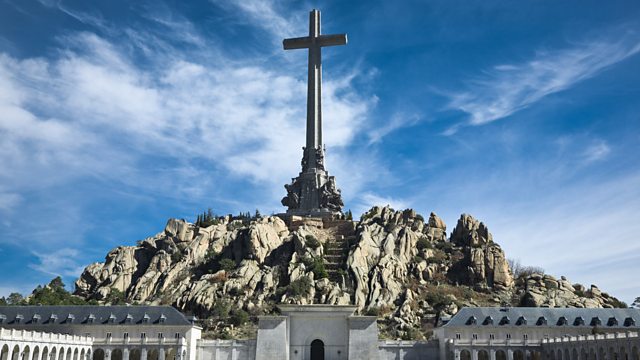 Cathedral of the Fallen

Giles Tremlett takes us on a journey to the The Valle de los Caidos, the monument at the heart of Spain’s tortured past.

Giles Tremlett takes us into the fierce battles being fought over The Valle de los Caidos, an enormous memorial to Spain’s civil war dead constructed by the dictator Francisco Franco. For some a great monument, for others a war crime, it has become a flashpoint for spiritual and political conflict.

The Valley of the Fallen is a giant cemetery, made visible by a basilica larger than St. Peters in Rome, carved into a mountain. Most striking of all is the free standing granite cross which at 150 metres is the tallest in the world. The visual association of Franco and Catholicism at the valley is stark, not least because of the giant cross; but it reflects the long held and close association between the two. The church supported Franco openly during the civil war, which lasted from 1936 until 1939.

In the aftermath of Franco’s death in 1975, Spain transitioned from dictatorship to democracy; but one aspect of the transition was silence over the issues of Francoist persecution and brutality. Today, the battle over how Franco and the Civil War should be remembered is one of the most significant religious and political conflicts in Spain; at the valley of the fallen, and the working church buried deep within it, they collide.