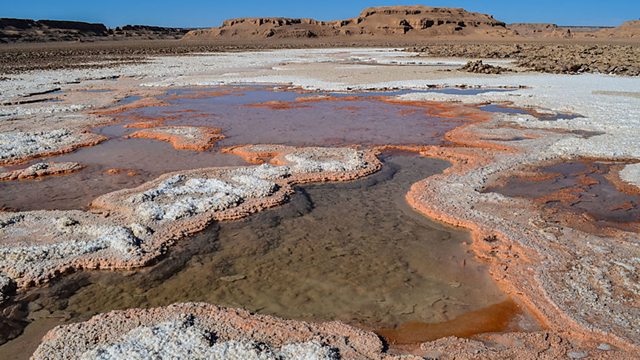 Unravelling the Mysteries of the Lut Desert

Exploring life in the hottest place on Earth. Moving the Archaeopteryx fossil, rethinking the cause of the Permian-Triassic extinction event and why bumblebees have smelly feet

A group of scientists are just back from an expedition to the hottest place on Earth. Dasht-e Loot or the Lut Desert in southern Iran is so hot and desolate it’s hard to imagine anything living there. There is very little plant-life in the heart of this arid, hot, desert, but a series of explorations of the region have shown that there are animals and even water.

What caused the “Great Dying”?
250 million years ago Earth suffered a massive extinction event. At the Permian-Triassic Boundary nearly all marine life and most of the life on Earth were killed off. It’s long been thought that this was a result of global warming. But new research looking at the sedimentary layers of rock form the time, show that it could have actually been an Ice-age that froze the seas and killed off the creatures.

Famous Fossil on the Move
Archaeopteryx is on the move - The Natural History Museum in London is about to let one of its most priceless fossils leave the building for the first time since it entered the institution in the late 19th Century. Archaeopteryx, which lived 150 million years ago, is one of the iconic specimens in all of palaeontology. Seemingly part-dinosaur, part-bird – it excited Darwin when it first surfaced because it looked to be an example of the transitional fossils the great man's theory of evolution had predicted. The "London Specimen", as it is known, is what scientists refer to as the holotype – the example against which all other Archaeopteryx discoveries are compared. To date, that’s about a dozen or so discoveries. And, ordinarily, you would have to go to the London fossil if you wanted to look at it. But the Natural History Museum is about to send the specimen to Japan, as part of a touring exhibition of some key treasures

Bumblebee’s Smelly Feet
Bumblebees use ‘smelly footprints’ to help determine where to find lunch. A bit like humans leaving fingerprints on everything they touch, bees leave a pheromone scent mark on flowers when they land. Using these smelly cues they can determine who has previously visited a flower and taken all the food.

Picture: The Lut may harbour a hidden sea: areas where the water table rises to within a few centimetres of the desert floor. Although vanishingly little reaches the surface - Reg Sookhte Spring is an exception - the extremely salty water may be vital to the Lut's denizens. Credit: Amir AghaKouchak

Evidence of the Earliest Life on Earth