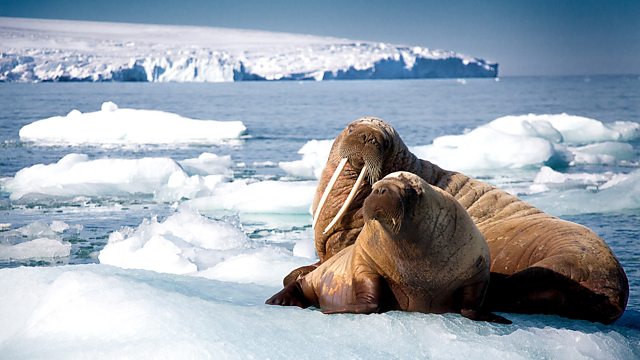 In recent years, our knowledge of life beneath the waves has been transformed. Using cutting-edge technology, One Ocean takes us on a journey from the intense heat of the tropics to our planet's frozen poles to reveal new worlds and extraordinary never-before-seen animal behaviours.

Starting in the tropical coral reefs - the most diverse ocean habitat - a baby dolphin is taught the secrets of a coral reef, as its family rubs against a particular gorgonian which may have medicinal properties. On another reef, a tusk fish demonstrates a surprising level of ingenuity - tool use - as it uses corals as an anvil to break open clams. In the Seychelles, half a million terns nest on an island. Fledglings must eventually take to the wing, but danger lurks beneath the waves - metre-long giant trevally fish leap clear out of the water to snatch the birds.

The tropical oceans drive our planet's weather. Sun heats the sea, creating rain, winds and huge storms that drive up towards higher latitudes. Here, unlike the tropics, the seas change with the seasons. In spring thousands of mobula rays gather in Mexico's Sea of Cortez. At night, in a previously unseen event, tiny organisms that light up when disturbed react to their wingbeats, creating an enchanting bioluminescent firework display.

Phytoplankton produce as much oxygen as all the plants on land and lie at the base of marine food chains everywhere. Where the plankton thrive, fish thrive too, and ocean travellers will migrate thousands of miles to take advantage of these productive seas. Predatory false killer whales off the coast of New Zealand are in search of dolphins. But when they find them, the whales team up with the dolphins to form super-pods - a formidable army to take advantage of the bounty of these seasonal seas.

In temperate seas around the globe, spring brings greening oceans. In Japan, a kelp-covered shipwreck is home to the Asian sheepshead wrasse, or Kobudai. At the start of summer a male mates with the females. But when a female reaches both a critical body size and age, it can undergo an extraordinary metamorphosis. Females change gender, and a new male challenges an older male to a face-off.

Toward our planet's poles, the ocean's surface is locked in ice. But in the Arctic, a warm current from the south keeps some Norwegian fjords ice-free all year round. Here, in winter, pods of orcas use dramatic tail slaps to stun herring, and humpback whales follow the noises to find the feast.

Ocean currents move heat around our planet and maintain a climate favourable for life. But our ocean system, in relative equilibrium for millennia, is changing at a worrying rate. Deep in the polar north, we meet walrus mothers and their newborn calves, searching for an ice floe to rest on. But with rising temperatures, summer sea ice is retreating - their battles to survive are becoming ever harder. As we begin to understand the true complexity of the lives of our ocean creatures, so do we recognise the fragility of their home.

See all clips from One Ocean (6)