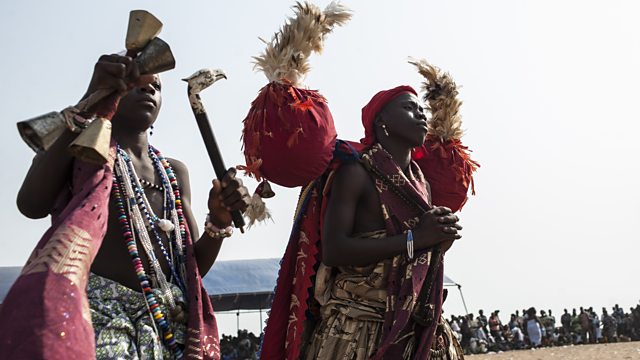 Searching for the Spirit of Benin

Ed Davy explores the roots, fervour and magic of Voodoo in Benin.

Ed Davey travels to Benin to attend the annual Voodoo Festival in Ouidah, encountering this ancient African religion in all its faith and fervour.

As travellers’ tales go, Jafar Habib’s account of the annual Voodoo Festival in Benin in 2011 is quite extraordinary. Jafar – a biochemist by trade – told correspondent Ed Davey that he had witnessed a voodoo priest decapitate a woman before raising her severed head in front of a baying crowd and reattaching it to her body. Then she came back to life.

Right across West Africa, Benin is recognised as the cradle of voodoo: a religion with more than 50 million followers in the region and arguably more ancient than the Old Testament. Now, five years on from the gory spectacle, Jafar returns to the country with Ed to find out more about voodoo magic in the region. They meet sorcerers, witch doctors and a voodoo king, plus an elderly magic man reputed to have the power to summon rainfall at will. Against a backdrop of fervent belief, they crisscross the country witnessing animal sacrifice and feats of magic. They face warnings about crossing “bad” voodoo priests at a risk of being “spiritually destroyed”, but also discover Voodoo to be a religion of love, bringing great contentment to many of its followers.

Nubians of the Nile

See all clips from Searching for the Spirit of Benin (2)