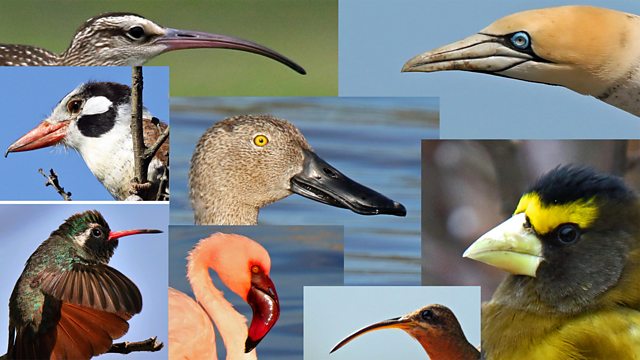 Birds display an incredible diversity of beak shapes and sizes, but how did they evolve? Also how the Antarctic ice conveyor-belt is helping scientists to find meteorites

It is relatively easy to understand the natural selection pressures on the Galapagos finches which led to the evolution of a diverse range of beaks, which so intrigued Darwin. Each species evolved a beak size and shape perfectly suited to the food most available to them. But what about the evolution of bird beaks over the entire group? From the flip-top bin beaks of pelicans, to the fine sword-like Scimitar bills and the spoon-shaped Spoon-billed sandpiper, when did these species diversify from their bird-like dinosaur ancestors 150 million years ago? A new study harnessing the deductive power of the public sheds light on the whole process.

Antarctic Meteorites
A new project to search for meteorites in Antarctica has been announced. Meteorites can tell us so much about the formation of the Solar System. They can be found all over our planet. But the best place to look is Antarctica. They are black, so they show up on the white ice; the region is protected, so they have not already been poached and the conditions are suited to preserving these space rocks. But the best bit, is the way ice moves in a conveyor-like action, it draws the meteorites from the centre of the frozen continent to the edges, often collecting at the edges of mountain ranges.

The Evolution of Invasive Behaviour
Understanding how invasive species move in the environment is important in helping us mitigate the damage they can cause. In order to do this, it would be helpful if invading species dispersed through an environment at a constant rate. But nature is nothing if it’s not complex! A new study looking at beetles moving around a board-game like set up in the laboratory has shown that individuals at the edge of an invading colony readily evolve to be better at dispersing. The effect is quite variable, but this snowball effect makes understanding how organisms disperse in a new environment all the more difficult.