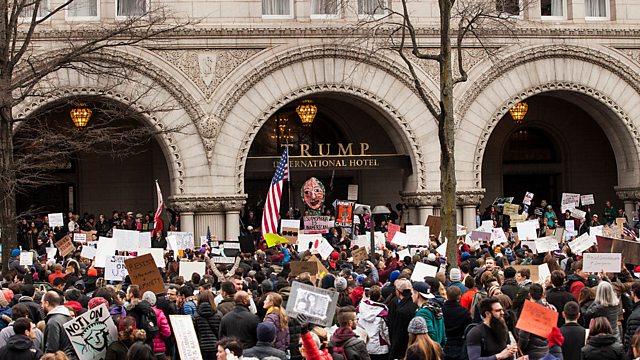 Some of the most powerful business leaders in America have been among those to criticize President Donald Trump's plans to ban travel from seven mainly Muslim countries.
In particular the bosses of some of the country's biggest tech firms have been quick to call on the President to think again.
We'll hear from the billionaire chief executive of the cloud software firm, Stripe, Patrick Collison. We'll also hear diplomatic reaction, from a former US ambassador and government adviser Norman Eisen, and hear from Dr Betsy McCaughey, Republican Lieutenant Governor of New York State in the 1990s and an economic adviser to Mr Trump while he was the President-Elect.

With almost daily stories about robots taking over everything from driving our cars, to our day to day jobs, are we all getting a bit hysterical about the prospect of artificial intelligence taking over our lives? Dr Chris Brauer from Goldsmiths University in London thinks so, and he'll tell us why.

Throughout the hour the BBC's Rob Young will be joined from Dehli by Sushma Ramachandran, former chief business correspondent at the Hindu Times. And from San Francisco by Michael Brune, Executive Director of the environmental campaign group the Sierra Club.

Picture: Demonstrators gather outside of the Trump Hotel International during a protest in Washington, DC. Protestors in Washington and around the country gathered to protest President Donald Trump's executive order barring the citizens of Muslim-majority countries Iraq, Syria, Iran, Sudan, Libya, Somalia and Yemen from traveling to the United States. (Photo by Zach Gibson/Getty Images)

Trump and May Face the Press