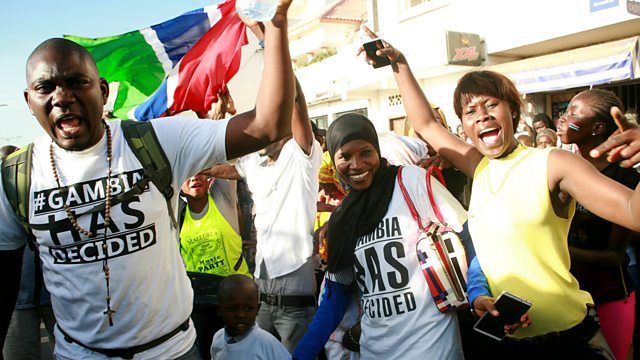 West African forces enter The Gambia in support of Adama Barrow, who is sworn in as the country's president, while Yahya Jammeh refuses to step aside.

The political crisis in the Gambia continues. Senegalese forces are now in the country, backed by the UN and ECOWAS, and President Jammeh still refuses to hand over the presidency to the incumbent, Adama Barrow. There is a new deadline for mediation but Colin Freeman, a Daily Telegraph reporter in the capital, tells us it is only a matter of time before he is removed by force.

Donald Trump has to begin the difficult process of uniting the country with his inauguration speech. We ask Michael Johns, a former speech writer for George Bush Senior how he would approach the task.

Also, the inauguration means big business, with all sorts of merchandise on sale to the huge crowds. Abha Bhattaral of the Washington Post tells us about the hot items.

Roger Hearing is joined from New York by Kara Alaimo, Assistant Professor at Hofstra University and Author of "Pitch, Tweet, or Engage on the Street." and from Hong Kong by Simon Littlewood, President of AC Growth Delivered.