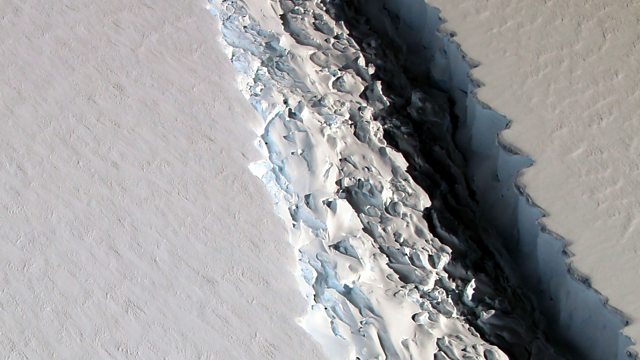 Ice Crack Will Shut Down Antarctic Base

Ice-sheet crack in Antarctica might threaten the safety of Ice Station. Also new satellite to monitor Earth’s wind; Volcanoes in art and measuring rainfall in the ‘Green Sahara’.

The British Antarctic Survey will evacuate all their researchers from the Halley VI base at the start of the Antarctic winter for safety reasons. This will be the first time experiments looking at the Ozone hole and measurements of the extreme environment will be put on hold.
The reason? A big chasm is opening up on the Brunt Ice Shelf where the Ice Station is situated.

Seeing the Wind
The soon to be launched, Aeolus satellite, will monitor wind speed and direction for the entire Earth. By firing UV laser light into the atmosphere and measuring the light reflected off molecules in the air, the spacecraft will be able to build up a global picture of wind patterns. This is something that has been missing from weather models and could improve predictions in the future.

Volcanoes in Art
The Bodleian Library in Oxford is putting on an exhibition showing the remarkable accounts they have in their archive of volcanoes around the world, and through time.

Measuring Rainfall in the ‘Green Sahara’
5-11,000 years ago, the Sahara in Africa was green with plant life. Wobbles in the Earth’s rotation about its axis meant that the monsoon covered what is now a vast desert. We know this from ancient lake sediments and archaeological finds. But new work looking at deposits of ancient leaf wax buried in sediment under the ocean is giving clues as to how much rain fell, turning the desert into an oasis.