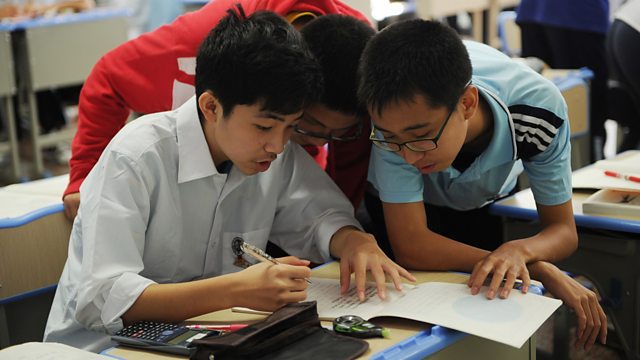 The Compass My Perfect Country
Episode 12 of 22

Has Shanghai found the perfect formula for teaching maths?

Behind these impressive results is the Shanghai ‘mastery’ approach to teaching maths, which assumes every pupil can be a maths master. There is no streaming according to ability, the highly trained, specialist teacher moves slowly through topics and does not move on until every single pupil gets it. And, so the foundations are laid for a rock solid mathematical understanding.

But with criticisms levelled at the high-pressure Asian schooling system, where success is often underpinned by hours of homework and extra tuition, is the mastery maths method an approach our imagined perfect country should adopt?

Based on the testimonies of teachers, parents and pupils recorded in Shanghai, as well as in a UK school that has adopted the Shanghai mastery maths method, the team discuss the pros and cons with the help of Anne Watson, emeritus professor of Mathematics Education at Oxford University.