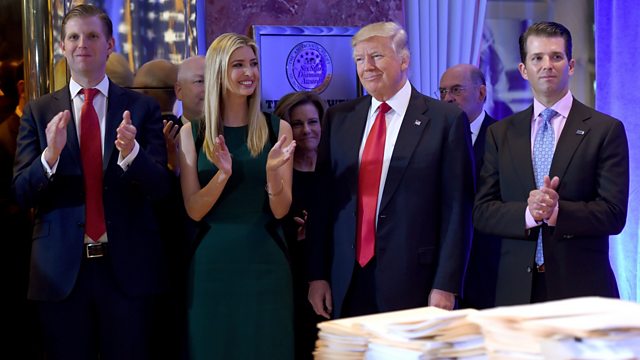 Trump: Keeping It in the Family

Critics say measures by Trump to separate himself from his business don't go far enough to eliminate conflicts of interest. Does it leave the president-elect vulnerable to attack?

Critics say measures by Donald Trump to separate himself from his business empire as he assumes the US presidency don't go far enough to eliminate conflicts of interest. Presenter Manuela Saragosa speaks to Jef McAllister, managing partner at the Anglo-American law firm McAllister Olivarius and a former London bureau chief for Time magazine, about the legality of Mr Trump's moves and whether they leave him open to attacks by political opponents. Also, the BBC's Michelle Fleury reports from New York about President Obama's economic legacy, and our regular technology commentator Jeremy Wagstaff tells us why 2017 will be the year artificial intelligence comes into its own.

(Picture: US President-elect Donald Trump along with his children Eric, Ivanka and Donald Jr. arrive for a press conference to address his business conflicts of interest; Credit: Timothy A Clary/AFP/Getty Images)