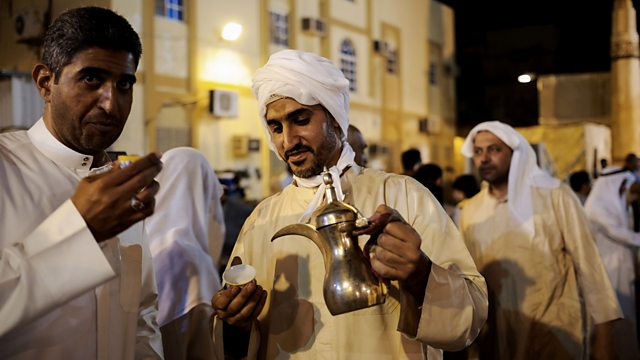 Abdul-Rehman Malik travels to Turkey to explore the relationship between Islam and coffee.

Journalist Abdul-Rehman Malik leads us on a journey to Turkey as he investigates the forgotten history of his beloved beverage. He discovers that coffee was popularised by Sufi mystics in the Yemen who used the drink as a way of energising themselves during their nocturnal devotions.

Abdul discovers that coffee was drunk in the sacred Mosque of Mecca itself, until the religious authorities issued a fatwa against it in the 16th Century.

With no pubs and inns in sight, coffee-houses would bring about a social revolution within the Islamic world. They were the very first spaces where people of all social classes could come together to discuss news and gossip. Consequently, the drink was persecuted by those in authority.

Back in London, Abdul scours the city back-streets, coming upon the site of London’s very first coffee house. He hears how coffee took the capital by storm, leading to a backlash from those who despised the drink they labelled an “abominable, heathenish liquid” and a “bitter Muhammedan gruel”.

Originating in Ethiopia, finding its spiritual home in the Yemen, evading zealots and Sultans from Mecca to Constantinople, defying prejudice from Vienna to London – coffee made its mark wherever it went, facilitating radical new forms of social exchange.

The President and the Press