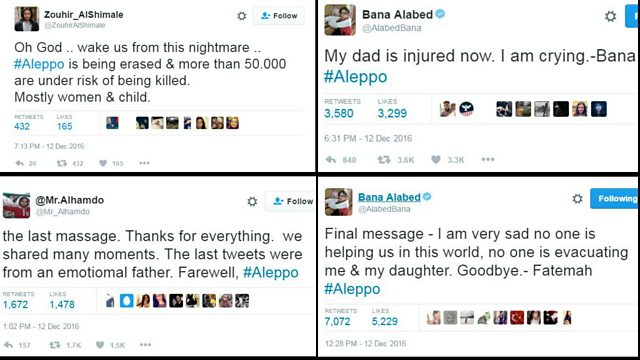 The 'final messages' from people in eastern Aleppo

Thousands of civilians are now trapped in a tiny area of the Syrian city under heavy bombardment. A US official with knowledge of efforts to secure safe passage for people trapped in the city told the BBC that some "50,000 people remain under bombardment" in Aleppo with the Russians rejecting the idea of pauses in the bombing to allow people to leave or allow injured children to be evacuated. UN Secretary-General Ban Ki-moon has voiced alarm "over reports of atrocities against a large number of civilians" in Aleppo.
So Aleppo is falling but at what cost?

(Picture: Montage of tweets from people who say they are in eastern Aleppo; Credit: BBC)