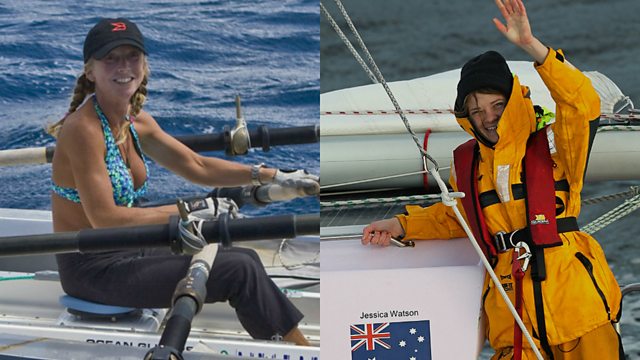 A round-the-world sailor from Australia, and a long distance rower from the UK discuss the challenges of being alone at sea.

Steering a small boat across oceans by yourself - why do it? Kim Chakanetsa meets two women who have been alone at sea for months - and they chat about encountering sharks, avoiding pirates and having to call their mums.

Roz Savage is the first woman to have rowed solo across three oceans - the Atlantic, Pacific and Indian. She had no background as an adventurer and in fact was a UK management consultant for years, but in her 30s she decided to do something completely different with her life. Roz says rowing the Atlantic was a huge struggle physically and mentally, but afterwards she wanted to put herself in even more challenging situations to see if she could do it, and to raise awareness about sustainability.

Australian Jessica Watson sailed around the world when she was just 16, battling storms and isolation, but also fierce criticism from those who thought she was too young. On her return after 210 days she was greeted by the Prime Minister and tens of thousands of people, and was later named Young Australian of the Year. Jessica says she did it partly to prove that young people, and young girls, can be serious and achieve incredible things, and they should not be dismissed.