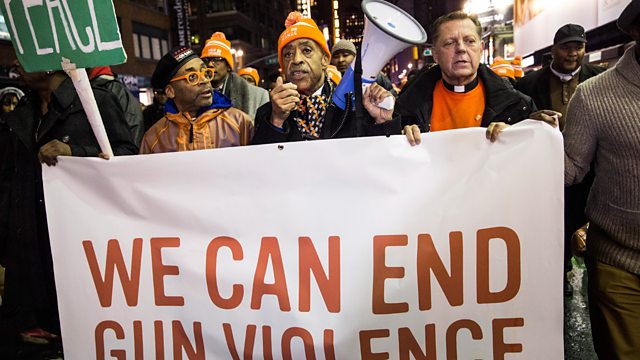 Rajini Vaidyanathan meets Father Michael Pfleger, the Chicago priest devoted to fighting gun crime on the streets of his parish.

Every week Father Michael Pfleger takes to social media to share the number of people killed over the past few days in his city, Chicago. The numbers are almost always in double figures and many of the dead are young African-American men shot on the streets that surround his church, St Sabina’s, in the almost entirely black suburb of Auburn-Gresham.

Rajini Vaidyanathan meets Father Pfleger after Sunday Mass, to explore with him why he has devoted his life’s work to trying to rid Auburn-Gresham of gun crime. Whilst the vast majority of this congregation is African American, Father Pfleger is white. Meeting with his parishioners Rajini discovers how personal his crusade has become. General Ware, a young man recently out of prison describes how Father Mike took him in after he found him wandering the streets late at night. Mothers Annette Nance Holt and Pam Bosley describe how Father Mike help them to find their faith again after the tragic loss of their teenage sons, both shot and killed. Father Mike shares how he has personally been affected by guns, his adopted son Jarvis shot just yards from his church door.

While many praise the work of Father Pfleger, there are others who argue some of it is cosmetic and that real change must come from within the black community itself. Maze Jackson discusses Father Mike’s role within the community and whether change can be sustained.

A Night in the Opera

See all clips from The Radical Disciple (2)