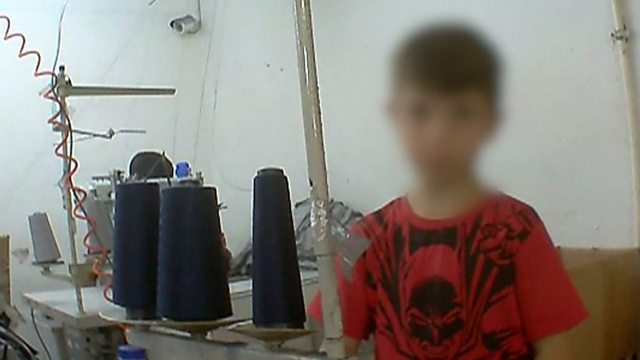 Is forced labour on the rise again? Ed Butler explores allegations of child labour in the supply chains of the big global brands, and asks whether there are technological answers.

Is forced labour on the rise again in the supply chains of the big global brands?

The BBC has discovered evidence of Syrian refugee children being made to work in factories in Turkey producing clothing for big name apparel companies. Ed Butler asks Andrew Wallis, founder of anti-slavery charity Unseen, what if anything such companies can do to ensure their products do not finance child labour.

Could the solution be in new technology? We hear from Mei-Lin Wan, vice-president of Textiles for Applied DNA Sciences, a company which is pioneering the marking of cotton with DNA to prove their origin. Meanwhile, entrepreneur Kohl Gill, founder of Laborvoices, has developed a smartphone app to enable workers to report abuse or slavery worldwide.

Also in the programme, the story of a Cambodian woman forced into domestic service and sexual slavery in China. Could direct whistleblowing for slaves themselves be made easier?

How to be Idle