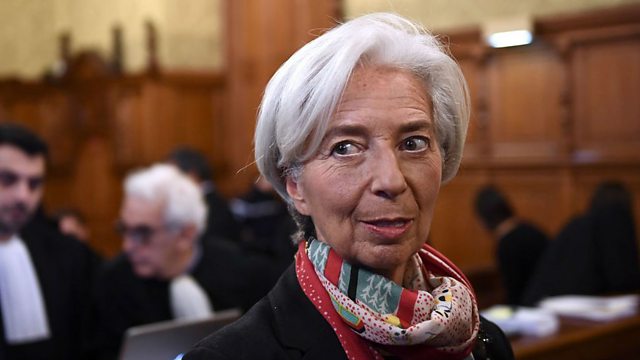 The head of the IMF, Christine Lagarde, has been found guilty of negligence in France.

The head of the IMF, Christine Lagarde, has been found guilty of negligence in France. We hear the background from Stephane Bonifassi of the law firm Bonifassi Avocats in Paris. Also in the programme, seven people associated with hedge fund Platinum Partners have been charged in New York in connection with an alleged billion-dollar fraud. Rob Copeland of the Wall Street Journal explains the case. Energy giant BP has signed a billion-dollar deal to develop natural gas resources off the coast of West Africa. Colin Smith, director of oil and gas research at Panmure Gordon, explains the thinking behind the deal. The BBC's Jennifer Pak reports from China on why cosmetics sold in China are unlikely to be cruelty-free. Plus Rogue One, the latest instalment of Star Wars, has beaten box office expectations. We ask George Solei of the Hollywood Reporter whether the movie industry is becoming too reliant on film franchises.