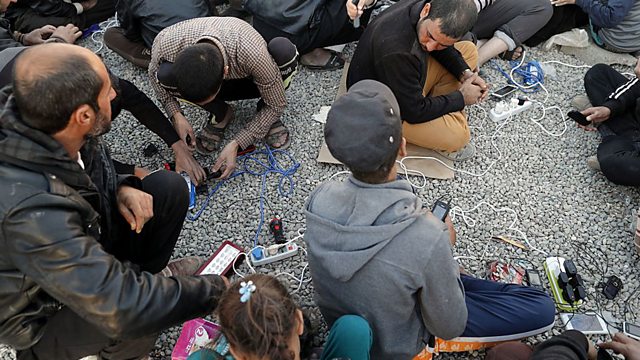 How might technology be harnessed to help refugees? Click talks to Tom Hayton from Techfugees about the hackathon challenge that flagged up the tech benefits from ideas that arose from a new competition.

Silicon Valley Tech Aims to Disrupt Nobel Prize
The Silicon Valley tech world has hosted its version of the Nobel Prize Ceremony, conferring big prizes ($3 million/each) for breakthroughs that will change the world and inspire a new generation of technology pioneers. Click’s Alison van Diggelen reports from the ceremony.

Tremor Absorbing Software
Researchers have developed special software for people with tremors like those who suffer from Cerebral Palsy and Parkinson’s disease and who find it all but impossible to use smart phones and other devices that require touch or swipe. Click talks to the computer scientist, Aviva Dayan, about the revolutionary tremor absorbing software.

Digital Traces
Researchers at Lancaster University in the UK suggest that iPhone users are younger and more extraverted than people who use Android phones. Click talks to the psychologist, David Ellis, about the research that flags up how people choose technology.

A Platform for Emergency Services in Nairobi