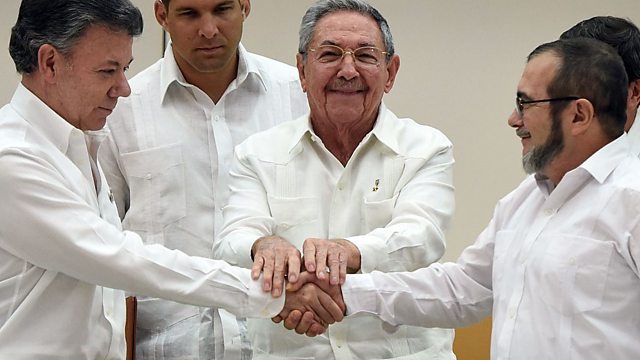 Jonny Dymond is in Colombia to debate peace and the legacy of violence with some of the key voices in this historic moment.

BBC World Questions comes to Bogota, Colombia, as the country seeks a recipe for peace and an end to one of the world's longest running conflicts.

President Juan Manuel Santos has been awarded the Nobel Prize for Peace, but the people rejected his deal with the leader of The Farc in a referendum. A new deal has been signed, but will it have legitimacy without a second referendum?

BBC World Questions, staged with the British Council at Bogota's Luis Angel Arango Concert Hall, provides an opportunity to discuss the future for Colombia at this key moment in its history.

Featuring a distinguished panel of guests including Sergio Jaramillo, Colombia's High Commissioner for Peace; Senator Ivan Duque, of the Movement Democratic Centre; Mariela Kohon, Director of Justice for Colombia and Advisor to the Peace Delegation of The Farc; and Dr María Emma Wills Obregón, who leads the Department of Gender and Women at Colombia's Historical Memory Commission.

See all clips from Colombia and Peace (2)