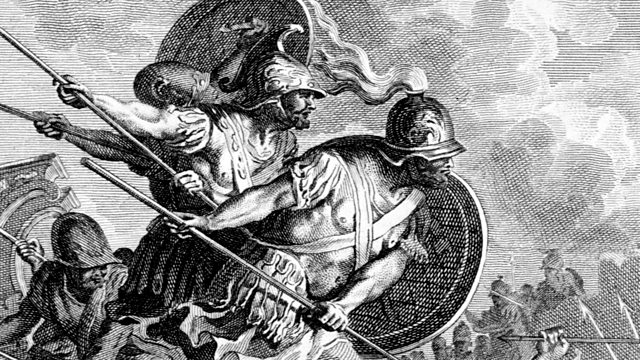 The Iliad: Beauty, brutes and battles

Bettany Hughes and guests discuss Homer’s ancient Greek epic poem, The Iliad, and look at its origins, themes and continuing relevance to people across the world.

Nearly 3,000 years after it was written down, The Iliad is still one of the most influential and inspiring stories ever told. Homer’s epic poem is a tale of war, but puts human emotions centre-stage: wrath, grief, love, heroism and separation.

With Bettany Hughes to discuss The Iliad’s origins, themes and continuing relevance to people across the world are: Stathis Livathinos, Director of the National Theatre of Greece; Antony Makrinos, a Greek classicist specialising in Homer who teaches at University College London; Professor Folake Onayemi, Head of the Classics Department at the University of Ibadan, Nigeria; and Edith Hall, Professor of Classics at King's College London.

Korea: Two Countries, One Past

Folake Onayemi at the University of Ibadan

Stathis Livathinos at the National Theatre of Greece