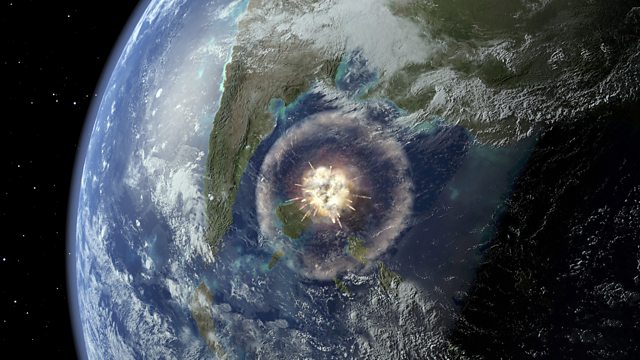 The results from drilled geological samples of the Chicxulub crater have just been published. The crater off the coast of Mexico is thought to have been made by a meteor striking the Earth 66 million years ago. The strike and resultant ‘sterilisation effects’ on the planet are thought to play a major role in the demise of the dinosaurs. Core samples from the inner ring of the crater show that the impact was massive. Rocks from over 20 km down were brought up to the surface. Principal Investigator Sean Gulick from the University of Texas explains more to Roland Pease.

New Zealand Earthquake
In the aftermath of the powerful earthquake that struck New Zealand last weekend, Roland Pease talks to seismologist Dr Tim Wright from the University of Leeds about the geological impact of the event and its implications for research.

Non-stop Swifts
New research indicates that swifts fly continuously for up to ten months non-stop, never touching the ground, even sleeping on the wing. How do we know this? Well in recently published research, Swedish scientists took advantage of the amazing level of miniaturisation in electronics and computers to track the birds. They have attached micro data loggers to the birds, to record a whole suite of data, including a light meter. With this, they can work out when the sun rises and sets and therefore know the latitude and longitude of the bird every day. Anders Hedenström, from Lund University in Sweden, explains to Adam Rutherford what else these gadgets can do.

Galileo Satellite
Europe has extended its satellite-navigation system by putting another four spacecraft in orbit. They went up on an Ariane 5 rocket from French Guiana. It is the first time Europe's premier launch vehicle has been used to loft Galileo satellites. Normally, they go up on a Russian Soyuz, two at a time. Mission success was declared once the quartet had been safely ejected from Ariane's upper-stage. Controllers immediately made contact with the satellites and confirmed their solar panels were deployed and generating power. The flight brings Galileo's in-orbit constellation to 18 spacecraft.

SMS Heart Patients
Researchers in Sydney are using all sorts of innovations to improve the health of Australians. Prevention is better - and cheaper - than a cure. But only half of patients who have had heart attacks and strokes actually take their medication which is prescribed to reduce their risk of further attacks. By sending four SMS/text messages a week to patients, public health experts have dramatically reduced their risk of dying. Claudia Hammond has been to the George Institute for Global Health in Sydney to find out about the research from Professor Julie Redfern.

The Inflamed Mind
Depression or psychotic illness is experienced by hundreds of thousands, perhaps millions, of people in the UK. James Gallagher talks to the psychiatrists investigating this new understanding of mental illness and to people who may benefit from treatments aimed at the immune systems rather than their brain cells.

The Mystery of the Beagle 2 Lander
The mystery of the lost Beagle 2 lander on Mars appears to have been solved. Gareth Mitchell talks to Professor Mark Sims, former Beagle 2 Mission Manager and Professor of Astrobiology and Space Instrumentation at the University of Leicester.

Sounds and Meaning Across World's Languages