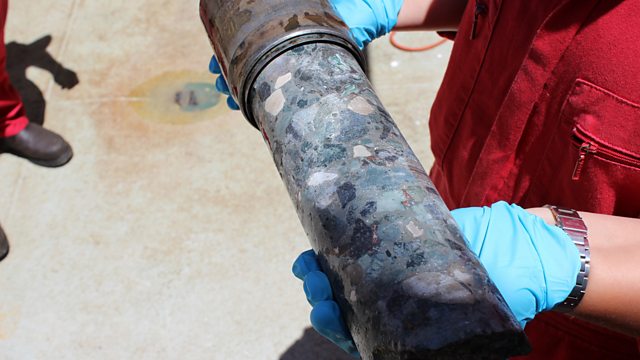 The results from drilled geological samples of the Chicxulub crater have just been published. The crater off the coast of Mexico is thought to have been made by a meteor striking the Earth 66 million years ago. The strike and resultant ‘sterilisation effects’ on the planet are thought to play a major role in the demise of the dinosaurs. Core samples from the inner ring of the crater show that the impact was massive. Rocks from over 20 km down were brought up to the surface.

Oldest Ice
This week marks the start of a three stage mission to drill for the oldest ice cores on Earth. The current oldest ice-cores reveal what the climate was like 800,000 years ago. But scientists from 10 European countries, including the British Antarctic Survey, want to drill further back in time to 900,000 to 1 million year old ice. This is because they think these ice-cores might hold atmospheric clues as to why the periodicity of ice ages switched from 40,000 year cycles to 100,000 year cycles.

Insects and LED Light
Annoying biting midges are less attracted to LED light than they are to the older "incandescent" lights. Researchers think this could be due to the heat output of older lights being higher than the modern, energy efficient LED lights.

Animal-free Food
A group of Chilean scientists are on a mission to change the way that we make food and reduce the impact of animal faming on the environment in the process . The researchers have set up a company that uses artificial intelligence to find a way to replicate animal-based products like milk, yoghurt, cheese and mayonnaise, using plant based ingredients.

How Dung Beetles are a Cattle Farmers Best Friend