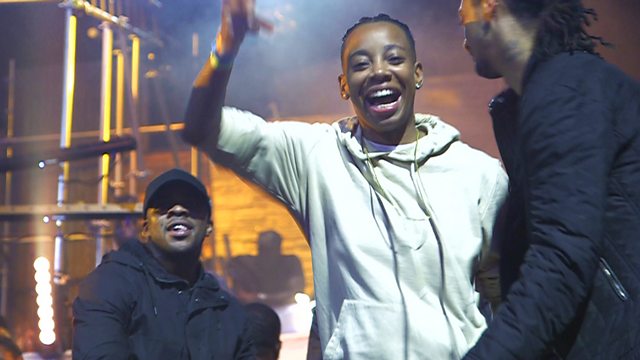 1Xtra’s A.Dot sets up the ultimate Grime Clash/Royal Rumble and gets under the skin of the modern grime scene along the way.

Part of this year's Black & British season, A.Dot’s Story of Grime tells the story of Grime through the art and culture of ‘the Clash’ – a war of words between MC’s that leaves the best artist standing.

Presented by 1Xtra’s A.Dot, it charts her attempt to set up the ultimate Grime Clash/Royal Rumble - ‘GRIMEAGGEDON' - allowing her to get under the skin of the modern grime scene along the way.

Offering his backing, contacts and advice to Dotty is clashing expert, Lord of The Mic’s founder and Boy Better Know member ‘Jammer'. Also featured are DJs Sian Edwards, Logan Sama and DJ Target, as well as established & fast rising MC’s including Jammz, Nolay, Prez T, Big Zuu, Ghetts, and a host of others.

A.Dot's journey culminates in ‘Grimeageddon,’ a Grime clash 'cypher' event, complete with an audience scoring the battling artists, filmed and recorded in the historic John Peel, Studio (4) at the BBC’s Maida Vale Studios.