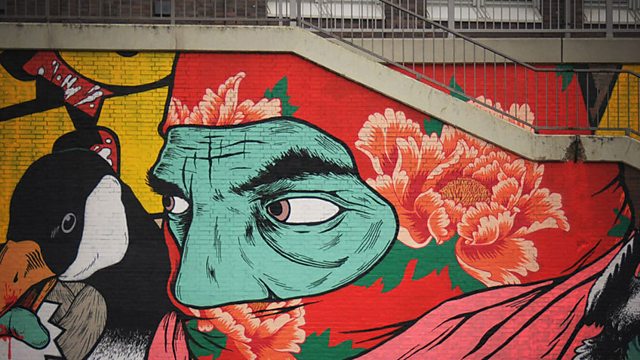 Turkish playwright Berkun Oya tells presenter Tina Daheley how he tackled the refugee crisis in his latest play Closed, and why he chose to set it in Copenhagen, Denmark. Closed is part of Theatre Uncut, which commissions plays as rapid responses to current events and enables them to be performed by anyone, anywhere in the world for free.

Reporter Sahar Zand meets a member of the Broken Fingaz street art collective from Israel. Against the colourful backdrop of his latest mural in Hackney, east London, they discuss the controversial group’s international presence and deep roots in their native Haifa, Israel.

Tina is also joined by Austrian-American film-maker duo, Richard Ladkani and Kief Davidson, who have co-directed The Ivory Game, a new Netflix documentary, executive produced by Hollywood actor Leonardo DiCaprio. The film blends undercover reporting in China and Africa with the suspense of a thriller, to expose the international ivory trade.

Chinese-American author Yiyun Li explains how lessons from her childhood have coloured her approach to the issues of immigration, racial tension and gender inequality in her writing, amid the divisive atmosphere of the US presidential election campaign.