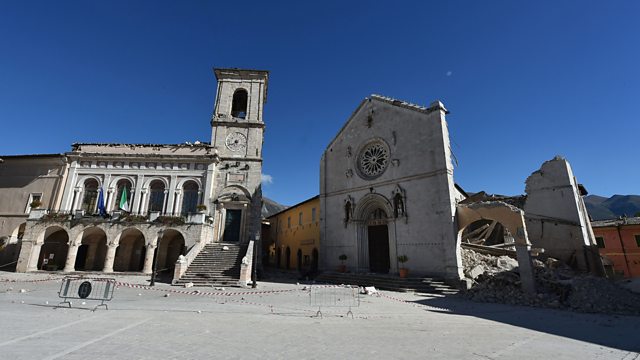 How the recent Italian earthquakes are linked. Also, how Ebola virus became so infective in humans, countershading in animals and will Iceland volcano Katla produce an ash cloud?

Geologist Ross Stein talks Roland through the geology behind the latest series of earthquakes in Italy. What connects them? And what danger still lurks?

Ebola Virus
The recent West African Ebola virus outbreak was the largest ever seen. With over 28,000 human infections, never before had this virus had such an opportunity to adapt to humans from its natural animal host. Several studies had shown that the virus was evolving but none had assessed if this had altered the way the virus behaved. Two international teams of researchers independently studied the effects of mutations that occurred in the Ebola virus surface protein – the protein it uses to gain entry into a cell – to investigate whether any of these changed its ability to infect humans.

Countershading
Lots of animals are dark on top and pale underneath. This colouration is called ‘countershading’. It’s long been hypothesised that it evolved to help the animal camouflage its shape. Helping it hide from predators, or if they’re a predator, they can hide from the prey they’re creeping up on. But this theory hasn’t really been tested experimentally, until now. With the help of painted cardboard tubes and willing woodland birds, researchers at the University of Bristol have shed light on this phenomenon.

Volcanic Ash Cloud
Back in 2010 silence descended in the skies over Europe when 107,000 flights were cancelled because Icelandic volcano Eyjafjallajökull erupted. The resultant ash cloud cost the aviation industry 1.35 billion Euros. But now another Icelandic volcano, Katla, which is much bigger than Eyjafjallajökull is showing possible signs of an imminent eruption. IF Katla erupts and produces an ash cloud and IF the weather conditions means it blows over busy European airspace, how well will the airline industry cope?