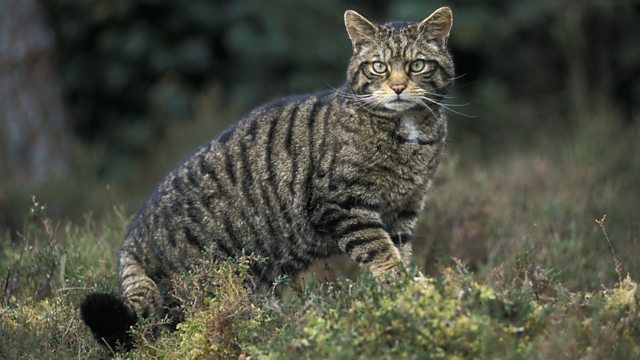 The Scottish Wildcat lives in the Highlands and is one of the rarest animals in the world. It looks like a pet cat, but it's a much, much better at hunting.

The Scottish Wildcat lives in the Highlands and is one of the rarest animals in the world. It looks like a tabby cat, but it's bigger, and has very distinctive stripes on its fur. It's also much better at hunting, with its powerful eyes and teeth.

Join a group of children as they visit a wildcat family at Edinburgh Zoo and talk to the keeper who looks after them. In the countryside, the cats are almost impossible to spot because they're camouflaged, and very shy of humans. Wildlife officer Emma describes the time she saw one with her own eyes, and we join her as she checks on a hidden camera in a forest where wildcats are known to live. The camera takes a picture whenever an animal moves in front of it - there could be photos of deer or birds on it, but will there be any photos of wildcats this time?

The programme contains two interactive sections:
- a quiz about other wild cats (ie big cats) in the world
- an activity section which will involves children moving around in a space, pretending to be a wildcat looking hunting for food, eventually spotting a rabbit and pouncing.

The programme is presented by Lucy Goldie.

See all episodes from Scotland’s Animals