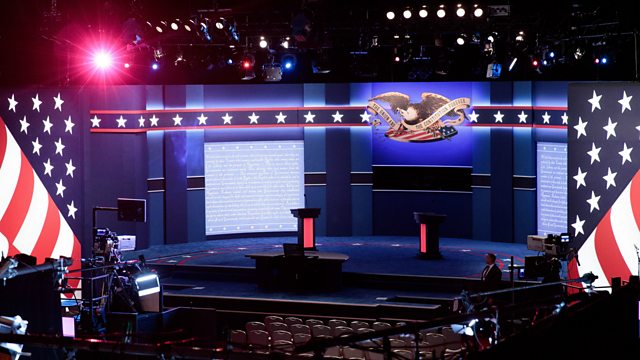 First US Presidential Debate of 2016

As Hillary Clinton and Donald Trump prepare to lock horns, we look ahead to the debate.

Republican Donald Trump and Democrat Hillary Clinton take to the stage in New York on Monday night, in what could be a defining moment of the US election campaign - the first TV debate. The duel at Hofstra University will likely be the most watched debate in television history, with an estimated 100 million viewers. There are 43 days until the election, with one poll on Monday suggesting some movement towards Mr Trump. We devote the programme to discussing how the action may unfold and what to look out for.

Dr Kara Alaimo, former US Treasury Department spokesperson and a professor at the host university sets the scene. Ken Rogoff, former chief economist at the IMF highlights the economic question marks hanging over both candidates. Joanne Bamberger, author of Love Her, Love Her Not: The Hillary Paradox, discusses the Clinton candidacy and the challenge facing women at the highest level of American politics.

Throughout the programme Fergus Nicoll is joined from Singapore by Simon Littlewood (president at Asia Now consulting group) and from Washington DC by writer Alexis Goldstein and professor Peter Morici of the University of Maryland.