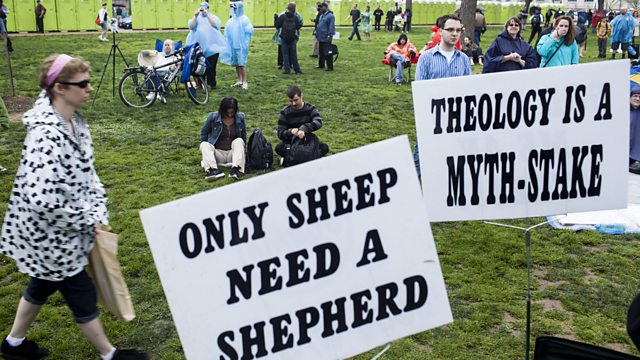 What does it take for someone to turn their back on their religious upbringing? What effect does that decision ultimately have on them and those around them? We explore the personal journeys of three people who walked away from their faiths and redefined their morality in a world without God.

A young ex-Muslim, a middle-aged ex-Hindu, and an ex-born-again-Christian, each recount what their lives were like growing up in devout religious families and what spurred them on to renounce their faith. The programme traces the moments that defined their journeys.

What did removing the hijab in public for the first time represent for the ex-Muslim? How did a religiously motivated bomb attack in India affect the ex-Hindu’s understanding of his faith? How did the ex-born-again-Christian learn to live in a world without morals and rules defined by God?

(Photo: Atheists and those who oppose religion in government gather for a rally. Credit: Brendan Smalowski/AFP/Getty Images)

The Force of Google