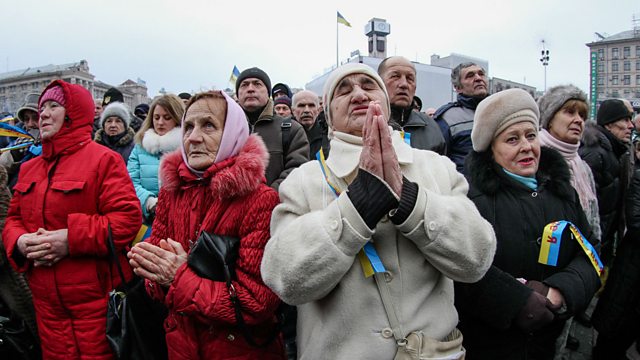 Faith on the Ukrainian Fault Line

The schism in the Ukrainian Orthodox Church is dividing communities, friends, even families, as they are forced to choose between Kiev or Moscow as their spiritual guide.

The schism in the Ukrainian Orthodox Church is dividing communities, friends, even families, as they are forced to choose between Kiev or Moscow as their spiritual guide.

After Russia's annexation of Crimea and conflict continuing in the east of the country, Ukraine's fraught relationship with Russia continues to cause controversy. In a country where the majority of the population consider themselves Orthodox Christians, Olga Smirnova investigates how Ukrainian's are negotiating the rift in Ukraine's religious landscape.

Miles away from the conflict in east, Olga discovers a dispute in the village of Pticha, where the village's only church has become a symbol of the major spilt in the Orthodox church being experienced across Ukraine. Followers of the Church of Moscow have locked themselves inside the church forcing those affiliated with the Kiev Patriarchate to worship outside in the church grounds. The villagers are at war; husbands and wives are divided, as are parents and children.

In Kherson, a town in southern Ukraine, Olga meets Priest Smitriev who on behalf of his congregation switched their alliance from following the Moscow Patriarchate to Kiev. Whilst Fr. Smitriev denounces his former church as a "participant in the murders of Ukrainian citizens" many of his parishioners refute their priest's decision.

The Making of a Saint

See all clips from Faith on the Ukrainian Fault Line (2)