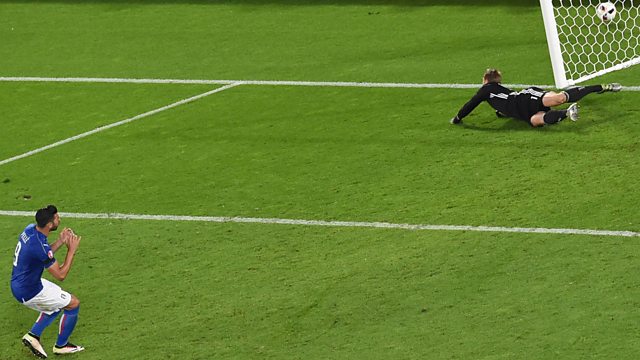 Claudia Hammond travels to Oslo to meet psychologists and football coaches to discuss how players can overcome their fear of the penalty.

In Rio athletes from around the world have spent years training and they know that to get gold it’s essential to keep it together mentally in those crucial minutes or even seconds that will make all the difference. In the second of her series on the Olympic Mind, Claudia Hammond is looking at the psychology of losing that edge. Why is it that for athletes at the peak of their performance, sometimes it can all go wrong – very wrong. Just think of the England football team which has on many occasions missed penalties at a crucial time.

To find out what happens in the mind at these all-important moments Claudia has been to talk to Professor Geir Jourdet at the Norwegian School of Sport Sciences. He explains how he helps footballers deal with performance stress. Former country cricketer and psychologist Steve Sylvester also talks to Claudia about how he has helped individual sportspeople overcome their fear of failing at key moments.

Claudia meets the coaching team at the Norwegian Premier League football club, Lillestrom, as they consider how to use psychology to help them get back to winning matches.

Dr Frank Abrahamsen, also of the Norwegian School of Sport Sciences, talks about being his country’s team psychologist at a number of Olympic Games.