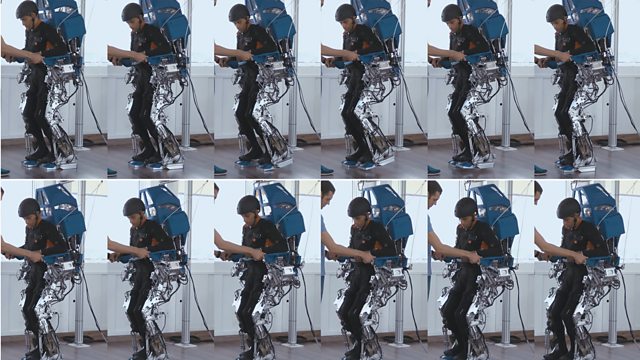 A small sample of paraplegic patients, who have spent from 3 to13 years paralyzed from spinal cord injuries, have regained partial sensation and muscle control in their lower limbs after training with brain-controlled robotics. The patients used brain-machine interfaces, including a virtual reality system that used their own brain activity to simulate full control of their legs. The return of even a tiny bit of feeling to their limbs below the spinal cord lesion is surprising and promising.

Clever Ravens
The Ravens at the Tower of London are helping research into bird intelligence. Ravens are Corvids, known to have big, neuron packed, brains, especially for their body size. Dr. Nathan Emery at Queen Mary University London, is an expert in avian intelligence. He explains that because these birds are very sociable and eat a whole range of different foods and have to figure out how to find it, they have become very good at problem solving.

Tool-making birds
In 2002 Betty, a New Caledonian Crow, astonished the world when she bent a piece of wire to make a hook to get food out of a narrow tube. Demonstrating advanced problem-solving in birds at its best. But do captive birds behave the same way in the wild? New research on wild New Caledonian crows have been observed bending twigs to make tools to grub out food.

Dark Matter
Dark matter is the stuff that glues the Universe together. It stops the Universe from rapidly expanding and tearing galaxies and the Earth apart. But scientists still don’t know what dark matter is made of. There are two main contenders for particles of dark matter: WIMPs (Weakly Interacting Massive Particles) and sterile neutrinos. The trendy particle at the moment is the sterile neutrino, and scientists all over the world are racing each other to be the first to find it. After CERN reported that they haven’t found any evidence for this sterile neutrino, Ice Cube in the North Pole has released their exciting results: they found…nothing! So is the hunt for the sterile neutrino over or is this just the beginning?