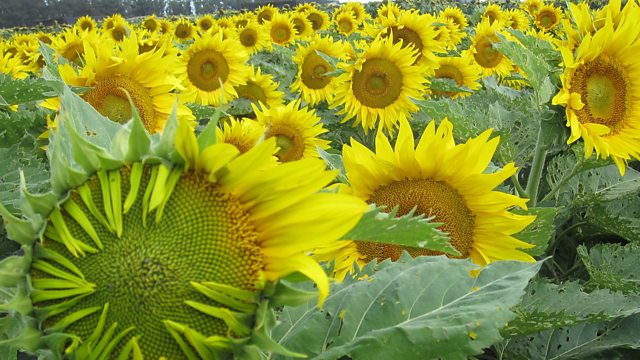 By manipulating young plants, scientists have finally worked out the mechanism by which sunflowers move their stems and leaves to face the sun. Starting in the east in the morning, tracking the sun through the sky, the plants make sure they get the most sunlight all day. And it’s all thanks to their internal clocks, their circadian rhythm.

China’s Great Flood
Geologists have provided geological evidence for China’s “Great Flood,” a disastrous event on the Yellow River from which the Xia dynasty is thought to have been born. Marnie speaks with David Montgomery, Professor of Earth and Space Sciences at the University of Washington in Seattle and an expert on separating the fact from fiction with flood legends and myths.

How Whales Hear
Whales use more than just their ears to hear. Since their early ancestors first walked back into the water, the evolution of whale hearing and sound production has been fascinating, Dr Ben Garrod regales Marnie with facts about whale communication and evolution, including why toothed-whales have asymmetric jaws and can stun their prey with ultrasonic sound.

Robotic Mudskippers
Understanding the physiology and evolution of the early creatures that crawled, out of the primordial swamp, and onto land has been made easier with the help of robotic mudskippers. By replicating the locomotion in these fish, that use their fins to crawl, researchers provide insight into the first land-creatures on Earth.

Record Temperatures in Kuwait and US

See all clips from Sun-tracking Sunflowers (2)