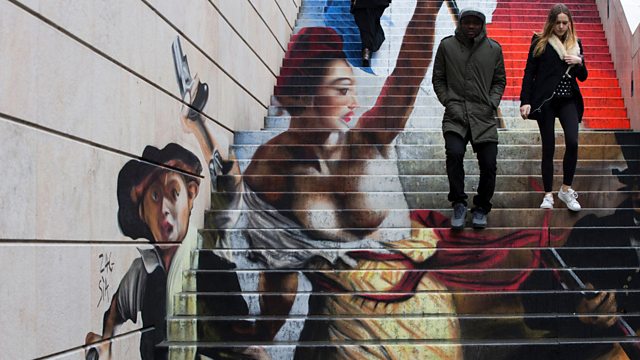 Graffiti: Paint and Protest in Europe

The Documentary Graffiti - Paint and Protest
Episode 1 of 2

Aside from the physical landscape, what does graffiti and street art actually change? Steve Urquhart investigates.

Graffiti’s modern role is evolving rapidly. From Europe to Brazil, street artists are displaying their anger about inequality, invisibility, corruption and control. Powerful images and words on walls are creating international headlines. But can breaking one law help to change another? Where should the line be drawn between democracy and vandalism, vandalism and art?

In an era of rapid political, social and economic change, graffiti in Paris and Barcelona has become more prolific – and less tolerated – than ever before. Artists including Blek Le Rat (the “father of stencil graffiti”), Roc Blackblock, Suriani and Vegan Bunnies defend their actions, and discuss whether such “freedom of expression” on walls should have any limits. Presented by Steve Urquhart.