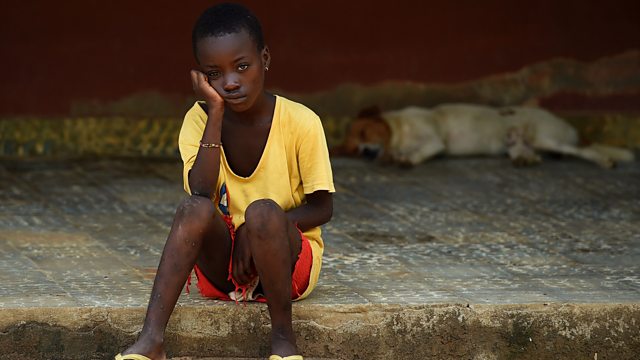 Radio producer Penny Boreham and Sierra Leonean storyteller, Usifu Jalloh, travel from the UK to Kailahun district, the remote eastern area of Sierra Leone bordering Guinea and Liberia, to meet the children they have been working with remotely in a radio project but as yet never met.

This is the area where Ebola first took hold in the country, and the radio project, initiated by the international child-rights agency, Child to Child, has been a lifeline allowing children to communicate health messages and support each other throughout the crisis and in its aftermath.

Usifu Jalloh is greeted as a popular hero; his stories have encouraged a renaissance of storytelling in the region. Children, speaking out about the issues that matter to them, have had huge impact in the community.
However, amid the joy of the meeting, Penny and Usifu grow more aware of the difficulties the children face. There are the problems directly resulting from the epidemic; orphans have been abandoned and stigmatised, families have been torn apart. There are the pre-existing problems exacerbated by the crisis - a huge increase in teenage pregnancies and escalating sexual violence.

Children complain that the porous nature of the border, which allowed both Ebola, and before that the long and bloody civil war, to enter the country, now allows sexual predators to escape justice. Penny and Usifu discover the radio project provides a window into these profound issues affecting children, whilst allowing children’s views to be taken seriously for the first time.

(Photo: A child under quarantine sits outside a care centre in Lokomasama, 2014. Credit: Francisco Leong/AFP/Getty Images)

Protectionism in the USA